Methodists have been worshipping in Chester as early as 1868.  In 1881 they moved into a building that was moved from Bedminster, now the Black River Playhouse building at 54 Grove Street. 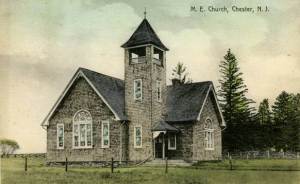 Methodist Church which burned down in 1921

In 1908 a new Methodist Church was built near the site of the current Boy Scout Cabin in Municipal Park. The church had a “bowled floor lecture room opening into the main audience room, paneled ceiling, beautiful Cathedral glass windows of elaborate design, steam heat, modern pews, choir gallery, a good piano, and lighted by acetylene gas; value of the property $8000”.
Due to economic reasons the 3 churches of Chester formed the Federated Church in 1918 with 120 Congregationalists, 100 Presbyterians, and 60 Methodists.  The Congregationalists withdrew after the war in 1920.
When the Methodist Church burned down in 1921, most of the Methodists joined the Presbyterian Church. 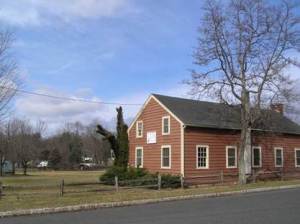